When LIFE Presses the Pause Button…

According to Greek Mythology, ACHILLES was one of the best fighters the gates of Troy had seen. ACHILLES who is known as the Greek hero of the Trojan War, was predicted to live a short life.  ACHILLES‘s mother didn’t want to lose her son too soon, so she wanted to make him immortal. She held him by the ankle and dipped  him into the River Styx.  River Styx is known to make you invulnerable. Whelp, as you would’ve guessed it, the dipping made ACHILLES invulnerable everywhere, except for the one area directly where she had her fingers gripped while she was dipping him.

The water did not wash up over this area. Since his spot of vulnerable was his heel, the term ACHILLES‘ heel has come to refer to someone’s weak spot. There are several synonyms for an ACHILLES’ Heel in modern language including: a weak point, a weak link, a flaw, an imperfection, a defect, a weak spot, and a chink in the armor. As ACHILLES went on to fight against Hector, ironically, his life was cut short by an arrow that speared directly into his vulnerable heel.  (resource: http://ancienthistory.about.com/cs/achilles/g/Achilles.htm)

SO, what’s the point of this story, you may be asking?  WHELP, I can say I know what it feels like to have a chink in the ole armor, if you will.

I apologize with my absence in the blogging world! On 10.29.15, my life hit a pause button.  I don’t like to pause, if you know me, you know that NO ORDINARY LIZ is always going 100 miles a minute hehe, or so it seems. But I had to go under the good ole knife to get my weak link, an imperfection or weak spot put back together!  I seemed to have found a way to rupture the most important tendon on my body.  What’s sad about it, I was too stubborn to do anything about it until recently.  Listen to your body, PEOPLE!  Whatever you do, DO.NOT.NEGLECT.YOURSELF, it’s not worth it.  Don’t let stubbornness take charge of what’s important…YOU!

So what’s been going on in my fun world while I’ve been recovering? 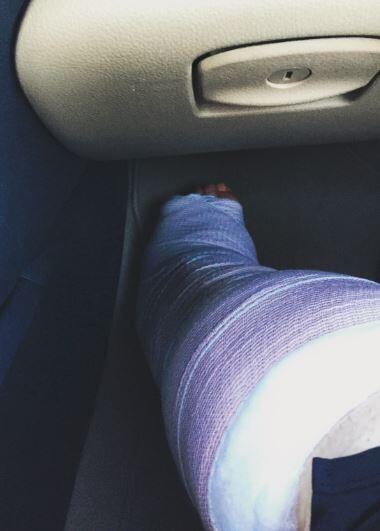 Say hello to my new friend..”bulky jones” splint/cast!  This was coming home from surgery day!  This little guy felt so HUGE and bulky.

Life really seemed hard trying to maneuver for the next few weeks at this point.  I had to be in this for two weeks, no shower, (NO SHOWWWWER) and no weight-bearing.  At this rate, you would think, ehhh, I got this!  BUT, you really take everything for granted.  I, all of a sudden realized that I didn’t have legs to walk, I had to crutch it around and let me tell you, I have a love/hate relationship with my CRUTCHES hehe.  I was trying EVERYTHING to make the padding soft, but nothing really helped.  BUT, you make it work, WHY?  Because, each day was progress from where you originally started. 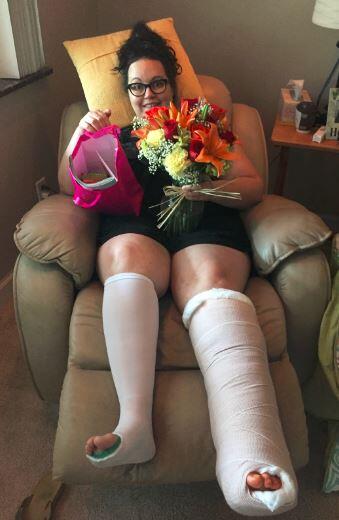 Being home and away from “LIFE“, the BEST feeling in the world was knowing that you had people on the outside that cared about you.  I was so stinking happy about my co-workers and friends sending good vibes my way each day!  OH and the visits were the best!  I believe that was the therapy my soul needed! 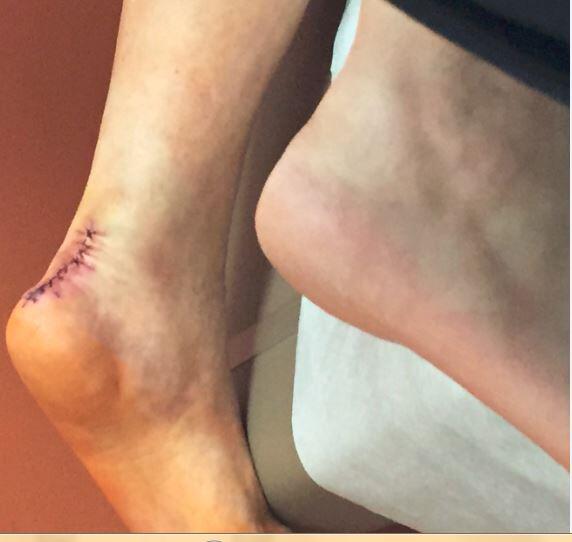 (Warning, not for the faint of heart) I’m now a couple of weeks into the healing process and I kept thinking that I had the biggest scar to kingdom come on the back of my leg, BUT to my surprise, the cut was almost 4″ long.  I can live with that!

So I ended back in the cast for TWO more weeks!  At this point, again, still NO SHOWER, (NO SHOWWWER)  I was ready for some normalcy.  It has almost been 4 weeks, no driving, no leaving the house, so cabin fever was settling in pretty good!  Netflix and chill was a common denominator in my life.  I believe I had watched every movie and was working my way into the TV shows.  I have a hard time just sitting still and learning the word PAUSE! But this is all part of the recovery process. See this… NORMALCY!  I finally got to get in my car and DRIVE.  It was a little FREEDOM towards my recovery.  It felt good to know that I was heading in the right direction.

I’d like to introduce to you Robordinaryboot!  I feel so proud to finally be in this!  I will have this fancy piece for at least two months!  Good news for me, I don’t have to sleep in it and can let me feet breathe!  It’s such an AWESOME feeling to have my foot back with me at night 🙂 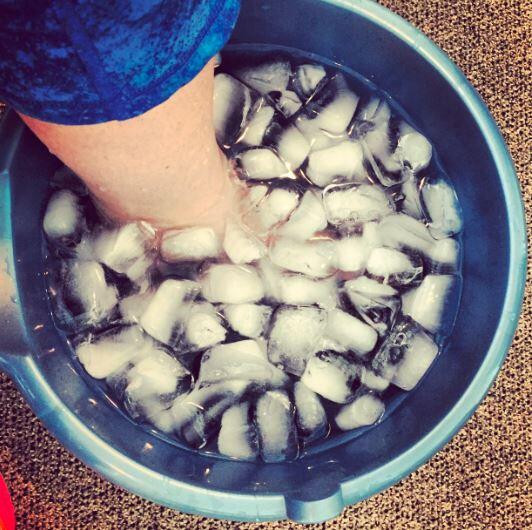 Thanks to Physiotherapy Associates for getting me back on the right track by allowing me to hit the “play” button to this thing called LIFE that I want to get back to!  Part of therapy is sitting in ice water for at least 8 minutes a day.  It hurt so gooooood! If you’re recovering, why not make it fun, right? Think you could do it?

Now this!  I absolutely LOVE this Rock Tape that is part of the healing process!  It comes in all sorts of fun colors and designs and it helps with swelling and makes my foot feel really good!  This is one of the best parts of therapy!  (shhhhh) 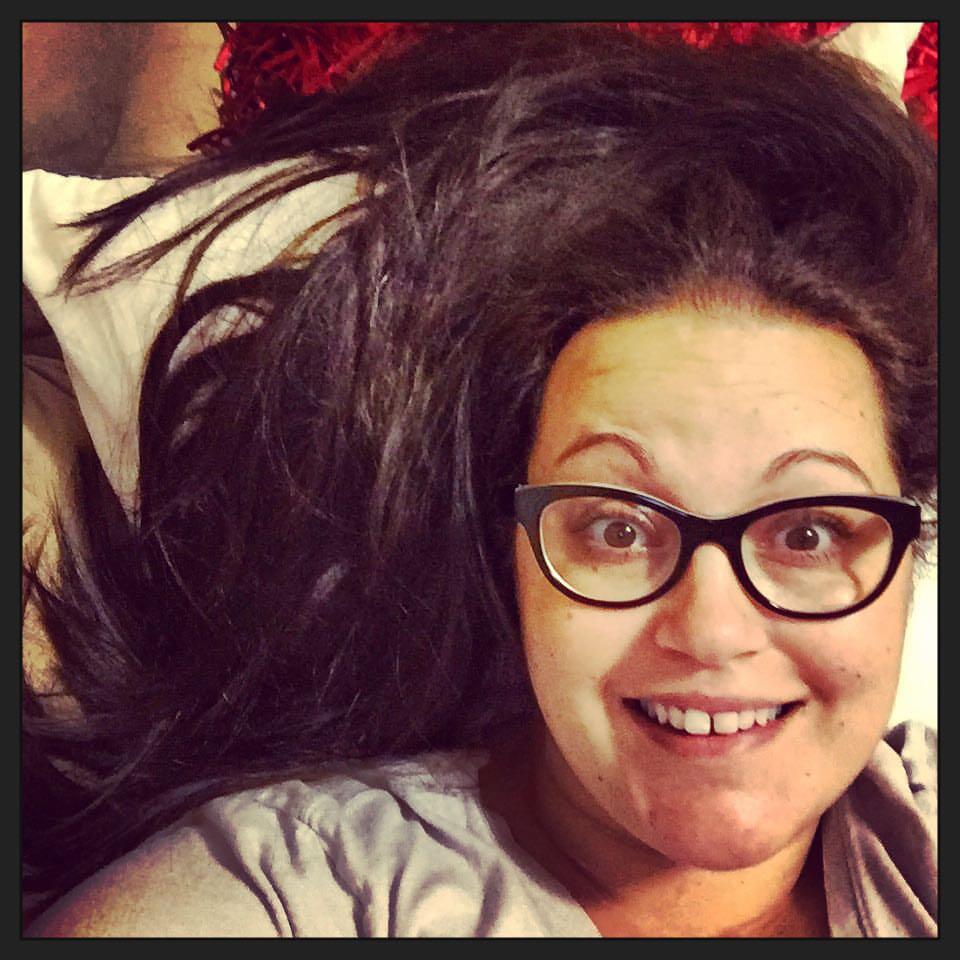 So this is how I feel about the outcome so far!  I’m almost 6 weeks in on this ACHILLES tendon rupture repair and I have to say that it’s been worth it, I already feel a BIG difference from where I was 6 weeks ago.  I know I have a long ways to go, but DUDE, I can’t wait to get out there and give this new “ACHILLES” of mine a new spin!  Do you think I will be able to run real fast like Usain Bolt?

Thanks to Florida Orthopaedic Institute for fixing the dent in my armor!

Here’s a fun fact for you…Stay tuned…I have to have the other achilles repaired in March!  More fun is on the way!  Now time to hit that PLAY BUTTON.