Today marks the 1st official week since Dolphin Tale 2 came out in theaters.  Did you know it is already ranked the #1 Family Movie in AMERICA?!?!?!  It has only been out a WEEK!!!!  This is just way cool 🙂  Have you seen it yet?!  Is it on your radar to see it?!?!  Oh I am just so curious to gather your thoughts on what you thought about it.  Did you leave the theater with bloodshot eyes like I did or have your shirt soaked because you didn’t have tissues with you…. 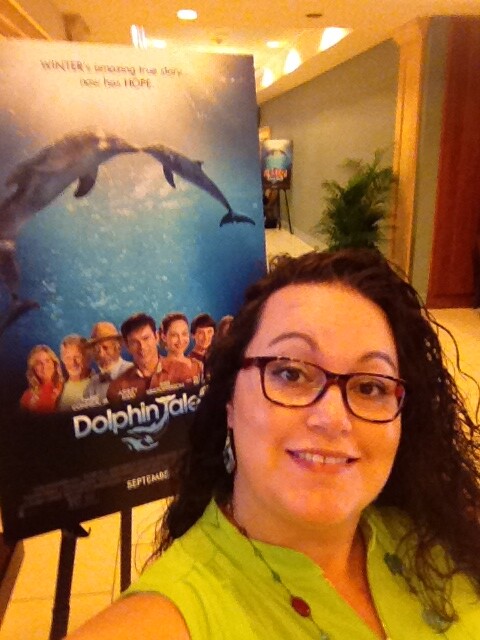 But first… let me take a selfie 🙂

I am actually still excited about my Press Junket weekend that I had.  I had the honor of seeing the movie weeks before it hit theaters.  I just think this movie was meant to happen.  In life, things just don’t happen.  The universe has a way of creating moments that you really can’t explain, or question, but know that they always have a way of working out in the end.  Dolphin Tale 2 wasn’t planned, it was born…

CEO, David Yates shared “Hope’s” arrival:  Dolphin Tale was about a 4-year project.  It took between 2 and a half years to write and film.  Just so happens that the last day of filming was on Saturday, December 11, 2010.   As the filmmakers,  cast, crew and CMA staff were celebrating the wrap of Dolphin Tale at Island Way Grill, CMA received a call around 5:10pm stating that they have a baby dolphin that needs to be rescued on the East Coast of FL.  11:15PM, that night, the rescue van arrives at CMA with the baby dolphin inside.  Fearing that she wouldn’t make it or not.  She was in bad condition, the rescue team grabbed her and put her in the water.  The casting crew thought that they were still filming a night scene?  The last Dolphin they took in was Winter, which was 5 years before.

So what are the similarities between WINTER & HOPE?

4 – Both found in same part of FL, Cape Canaveral 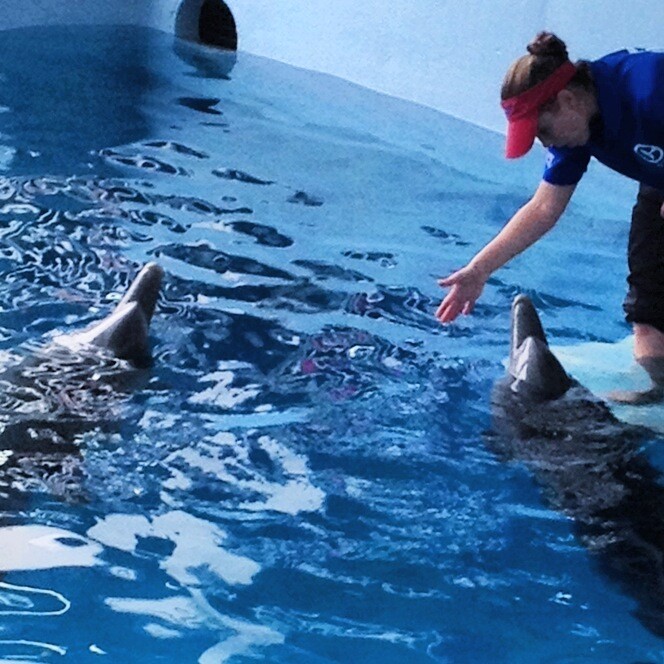 It’s simply amazing to see what happens when FATE occurs in life…You just sit back and watch a BEAUTIFUL friendship form!  #WinterHasHope will last a LIFETIME.

So you seeee, it’s pretty crazy how life can play out sometimes, huh?  This movie was pretty incredible.  I am NOT going to give any spoilers away, but I hope you make it through the END… without shedding ONE tear 🙂

OOOOOOOOOOOOOH YEAHHHHHHHH I forgot to mention that this happened…. 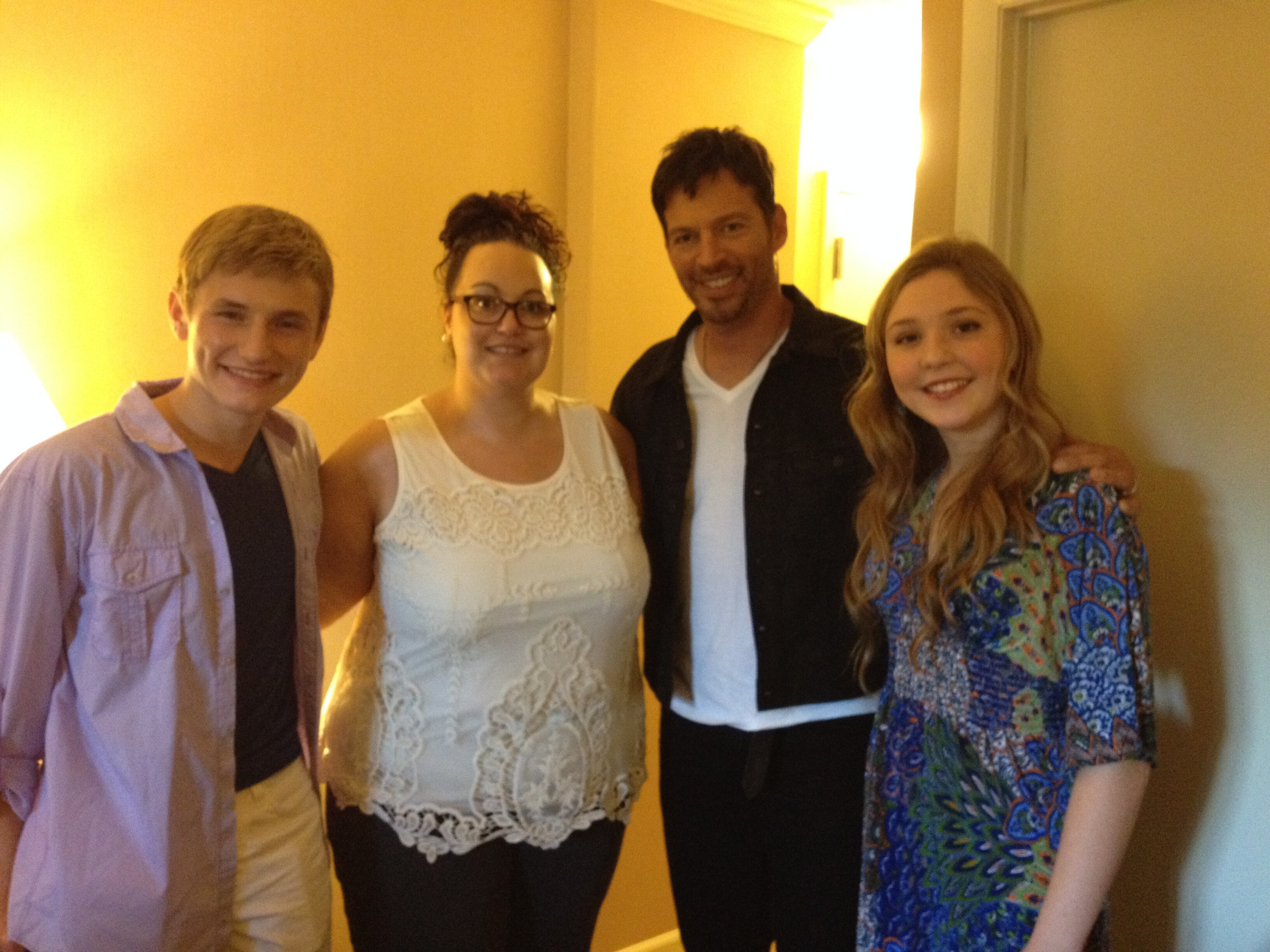 I could hardly contain myself as I got to be part of the press junkets for the weekend and interview some awesome casts!

Standing left of me is Nathan Gamble, who plays Sawyer Nelson

Standing right of me is… Harry Connick, Jr, who plays Dr. Clay Haskett

Standing right of me is Cozi Zuehlsdorff, who plays Hazel

When interviewing everyone, it was such ease!  Nathan and Cozi entered the room first and was hilarious from the start.  Harry entered shortly with his wit and he stated, “who are all these pretty girls when I was in high school?”  I could have fallen out of my chair right then… but I didn’t.  We only had 15 minutes or so with them, so the casual conversation began.  The Tampa Bay Bloggers and I were asking away…

TBB: How was it revisiting your roles the dolphins?

Harry: “Man, it was amazing.  You know, there is a little bit of a learning curve I think that goes into any new project.  It’s like going to any new school or summer camp or new film.  You have to get to know people.  As great as these people are, it didn’t take long to get to know them in the first film, but we became so close throughout filming the first movie, that the second one  was something  like a family reunion, we just jumped right in and knew who the characters were.  Although, the context was different, we were able to jump right in, which is a great luxury and doesn’t happen very much.”

Nathan: “Shooting with Winter, ah is so amazing to say that you can work with the most amazing famous dolphin is special.”

Cozi: “Hope is so fun.  She is such an adrenaline junky.  You just have so much fun being with her. They both have distinct personalities. It’s great to get to know them.”

TBB: How has Winter changed your lives?

Harry: “We all have different perspectives, but I think over the course of your life we all are constantly dealt with a bad hand, whether it’s a death of a loved one, or maybe it’s a career setback, relationship problems, you know, there is something to be said for acceptance and being able to process adversity gracefully.  Yeah, Winter is a dolphin and obviously doesn’t process things the same way as we do, but when you see how everyday Winter just does about her life seemingly um happy, it just makes you look at things slightly in a different way I think.  In that way, it has been pretty profound for me.”

Nathan: “For me, one being before I did the Dolphin Tale movies, whenever I saw someone in a wheelchair or with a physical handicap, I would think of them differently, I would be like, Oh my ghosh, that person looks differently then I do.  When really they are just humans and have personalities like I do. They are just more braver than us.

Cozi:  Yea, Winter has provided us with a lot more perspective  than usually teenagers get to have.  When we talk to kids, we try to encourage them that the only difference  between someone with a harder life challenge than you is that they are braver than you, than any of us hope to be.

TBB:  Harry:  You have done it all!  Singer, Broadway, TV, Movies.  What has been your favorite and what do you want to go back to?

Harry: “Well I like the variety of it.  Like I love being on broadway, I’d like to do that again, but you know, after doing six months of 8 shows a week, it’s very intense and I have a short attention span.  I like to mix things up.  So I think it’s the variety itself that I like.  This I can say, was the best movie making experience that I had, two of the best movie experiences that I had.  So I just like to mix it up.  Hopefully, If I am lucky enough, I’ll be able to do more of everything.”

TBB:  What was your favorite spot in the Tampa Bay Area?

Such a great experience meeting the cast!  I hope you do check out Dolphin Tale 2 sooner rather than later… EVEN if it means your reading my post while your in line waiting to get your movie ticket…..